This spring we planted 85 acres of corn which we made into silage this past week. We had never planted corn for this purpose before. Throughout the summer as we went checking on it we were beginning to wonder where we would put ALL this feed. As the corn kept growing taller and taller we thought we might leave some for combing later on. But we ended up cutting the whole crop for cattle feed.
It as right beside our yard and at one point and time our youngest two boys thought they would take a short cut through the field. It was not long before they realized that maybe they should not of tried it. As so often is with a short cut it turned into a walk the long way around. Raymond had gotten Randy to get onto his shoulders,hoping he would be able to look over and see where they were. This was not enough height so they just kept on walking making it out at the end of the field. They both decided that they would find somewhere else to walk after that. Both were very happy to be safe,but had quite a tearful story to tell when they came in.
Standing in front of the huge corn!

It yielded about 16 tons per acre.
It is hard to know when the right time is to cut it. To much frost makes it to dry and not enough it can be to wet. But we were happy with the amount of moisture and green that it had when we cut it.
Once on the pile it needs to be packed.
After the pile is done it gets covered with a tarp so it is airtight and it can ferment.
This is only one of the three piles we made. 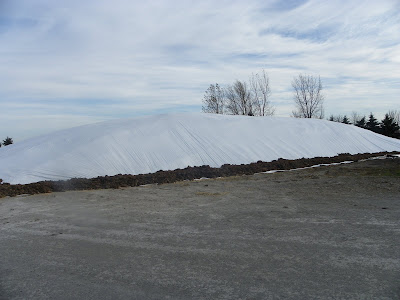 Another job done before winter sets in!
Posted by Living In His Blessings at 6:07 PM

What a big job! I'm sure you arehappy to have that done, and so are your cows. :)
We are looking forward to tomorrow!!!

Living In His Blessings
We are a farming family in the southwestern part of Manitoba. We have a family of eight children.We are a home educating family.I do this blog together my daughter.Come along with us as we jounry through this life.